I say ‘our’ Mountain Trike – yet it is of course Angela’s. It is her Trike, her set of wheels, and very proud of it she is too. Angela was taken ill with a severe brain hemorrhage early in 2014 which took away her balance control and affected the coordination in her limbs – getting out and about required a wheelchair. The episode marked the start of a lengthy rehabilitation programme as Angela worked to regain her independent mobility – something that was going to span a number of years.

At the start of 2015 what we could do that would enable us both to get out in to the outdoor world again. We live in Northumberland right on the edge of the Cheviot Hills and just a short drive away from the long sandy beaches of the north east coast up to Berwick upon Tweed. We have walked the hills for years – explored the west coast of Scotland and Islands extensively. We both had the desire to get back out there again and not miss out on something that we both love to do.

The question was what to do. Standard wheel chairs are pretty useless once you move on to even the most modest of rough or soft surfaces. Motorised chairs are big, heavy and can only run over some sort of prepared surface – and what on earth do you do if the battery expires or you beach the thing at the far end of your days outing.

After much lengthy searching around the internet only one candidate seemed to offer a solution – the Mountain Trike. Off road, light and mobile, and readily lifted in to the back of the car. And UK produced as well. The idea was suggested and as we discussed the options our daughter sent a note back over the email – ‘Hey I have seen one of those Trikes. I have sat in one and had a go. It was in the North West on a canal towpath. They are really cool.’

Yep – a situation we and other Trike owners have come to appreciate – the sheer quality of ingenuity and engineering represented by the Trike causes passers-by to stop, ask and admire. That was it – at the start of the year we gave a ring and arranged to visit Mountain Trike in Cheshire and give Angela the chance to have a go herself. It was clear there was only one real decision to be made – what colour should Angela’s Trike be!

Five weeks later Angela took delivery of one large cardboard box containing one Mountain Trike – colour Blue. Steering and both wheel brakes were connected to the right hand handle – where Angela could apply the best level of control. The Trike was also provided with the push-bar accessory so that extra propulsion could be given to help her along when needed. Within minutes she was ready to get outside and give it a go.

Since that day Angela has enjoyed the summer months with the freedom to get out and about in to the great outdoors – indeed we both have. The Trike has been out with us to the hills, along forest tracks, on beaches, along canal towpaths, around country estates, attending our son’s wedding, touring towns and cities, in churches, on ferries and around the supermarket. Accessories have been added – a couple of holders for water bottles and two cycle handle-bar bags to carry gloves, hat, puncture kit and a packed lunch for us both. We both enjoy watching wild-life and photography and using a bit of Velcro strap a camera tripod can also be carried along with us. 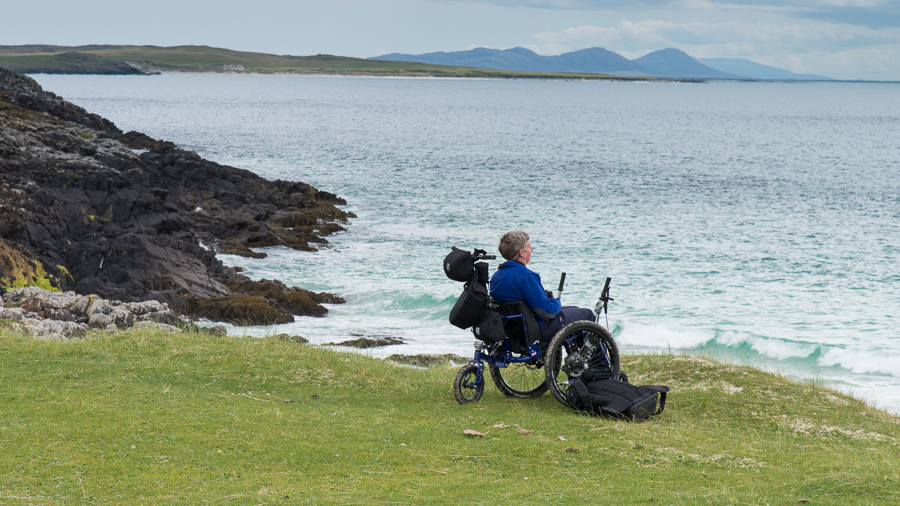 The Trike is an extremely versatile piece of equipment. Over level and even ground Angela is able to propel herself along using the twin drive handles. A helping hand using the push-bar gives an increased rate of progress with very little additional effort needed. On steeper ground Angela does need additional assistance – particularly if you are setting off to climb the hills and significant height has to be gained. We take it steadily and share the effort with Angela using the drive handles and me on the push-bar.

But it is when coming down a hill or slope that the Trike comes in to its own – any descent can be controlled by Angela directly using the brakes. No need for a pusher to ‘hang on’ to the wheelchair to prevent the incumbent careering off down the hillside. A steadying hand on the bar is helpful on steep descents and any outing can be completed with an enjoyable walk / ride back to base side by side, independently, walking / riding at our own speed. 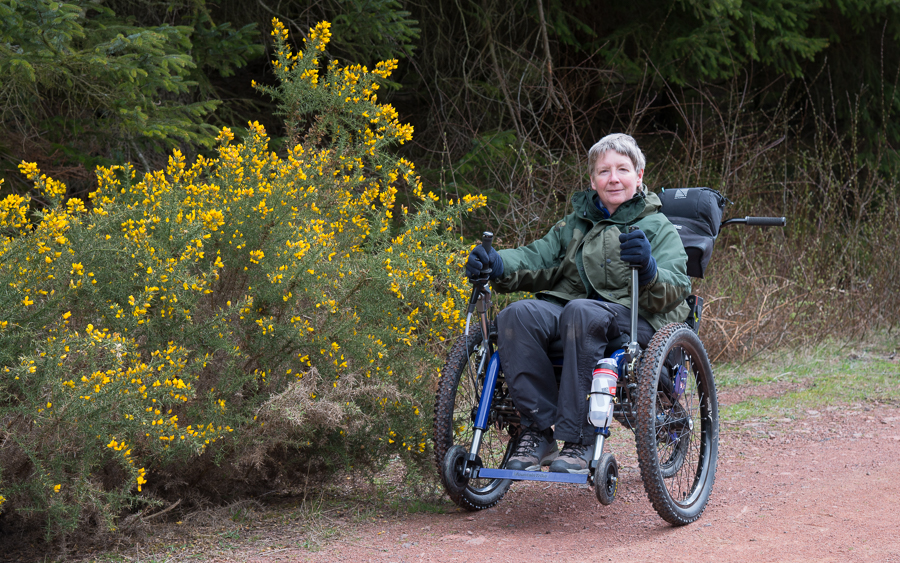 Our annual holiday this year was a trip through the islands of the Outer Hebrides off the west coast of Scotland from Barra to Lewis. This was a trip we would not have contemplated without the Mountain Trike. At home and with the added enthusiasm of our children we have taken Angela up to the Scottish border fence between Windy Gyle and the Cheviot from the Northumberland side – where the Pennine Way is crossed by the ancient road of Clennell Street. This is a climb along both track and ancient road – more a path really. True the path on the hillside was rather more washed out that we remembered – but we got Angela up it (for a short and really steep section Angela had to be helped along without the Trike) and lunch was taken looking out over the Scottish Border valleys on a lovely sunny summer afternoon. Despite the roughest of ground the Trike takes it all in its stride without the slightest hint of being beaten whatsoever.

The Mountain Trike allows us both to get out and enjoy the outdoors – that is why it is ‘our’ Trike. But it is really Angela’s Trike. 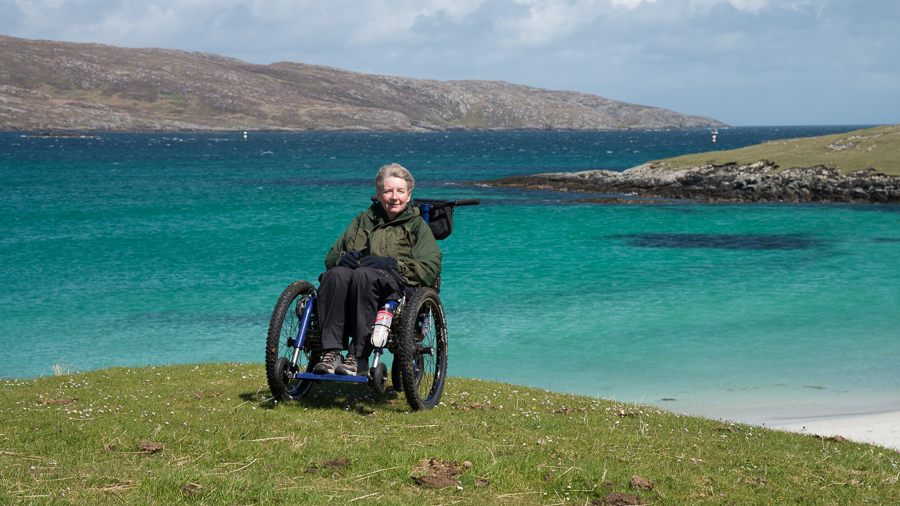 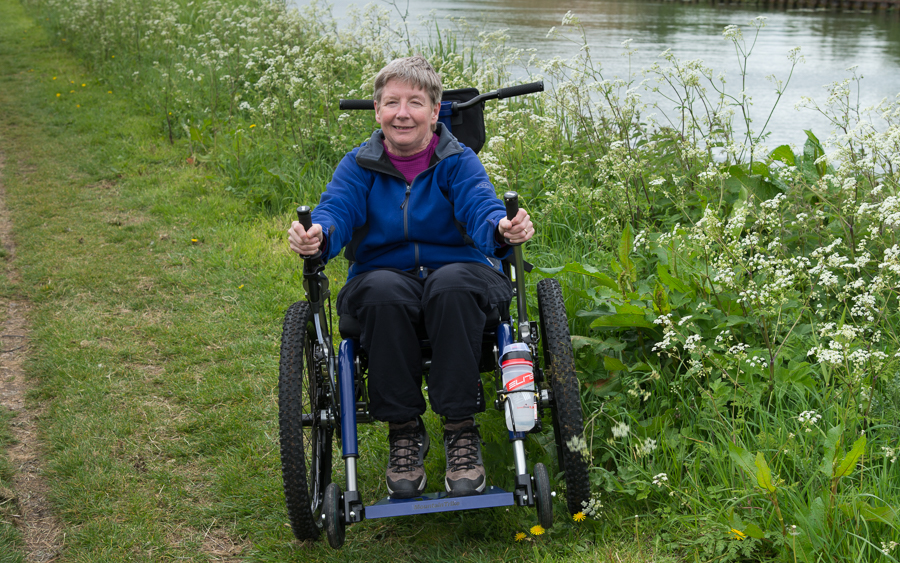